On the 24th of February 2022, a geopolitical seismic shift occurred when President Vladimir Putin of Russia ordered his troops to invade Ukraine. Conventional war between nation-states had returned to the European continent for the first time since the devastation of the world wars of the 20th century. Tension in the region had been brewing since Russia’s annexation of the Ukrainian territory of Crimea in 2014, accompanied by an uprising by Russian-backed separatists in the eastern part of Ukraine. The timing and scale of the invasion caught some policy experts by surprise given the stakes involved for Russia and its relationships with the rest of the world.

One of the long-term consequences of the invasion is the projected increases in the military and defence budgets of countries both near to and far from the conflict. The North Atlantic Treaty Organisation (NATO), which consists of 30 members from North America and Europe, is waking up to the threat of a hostile Russia on the borders of some of its members. Public opinion within these countries has drastically shifted towards a willingness to allocate more of its resources towards resisting Russian aggression in Ukraine and strengthening its defences at home.

NATO’s long-term goal is for each member to spend at least 2% of its gross domestic product on its military defence budget. Some members, most notably Germany, have been spending below this target for years, but the Russian invasion of Ukraine caused a dramatic turnaround in Germany’s approach to Russia. According to Stockholm International Peace Research Institute, 69% of the German electorate are now supportive of the government’s plan to increase spending on its military, compared to just 39% in 2018. Similarly, in 2014, only 21% of Germans wanted to send more German troops to NATO countries in Eastern Europe, according to a poll by ARD. By March 2022, this figure had climbed to 68%.

In addition to boosting expenditure on its own military, Germany has also reversed a decades-long policy of restraint in providing military aid to foreign countries. However, the magnitude of its support pales in comparison to other Western allies. The support is led by a gigantic 3-billion-euro aid package from the United States which is expected to increase significantly in the coming months. The following graph indicates the arms and weapons commitments by various countries excluding humanitarian aid and funding for Ukraine’s government. 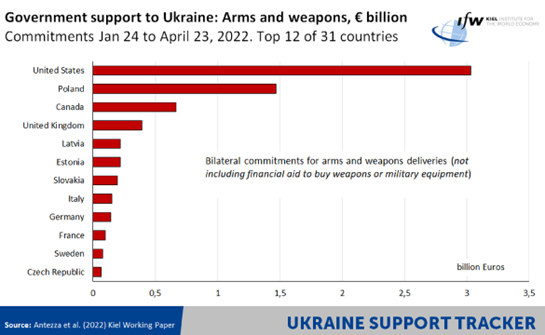 Long before the invasion of Ukraine, military expenditure had been increasing steadily as trade tensions and territorial disputes among major powers gained prominence in the news cycle. The following graph reveals the growth in global military spending over the past three decades measured in constant 2020 dollars. 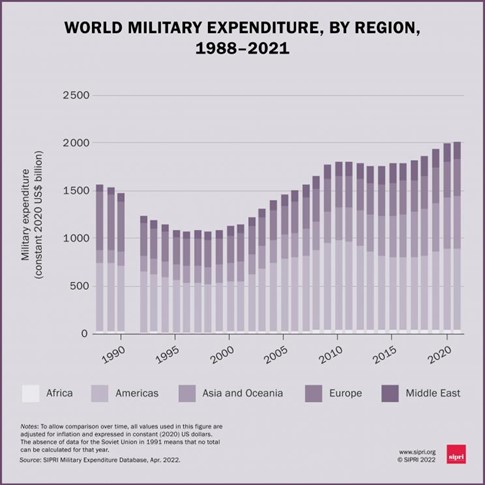 In terms of overall military spending, the United States and China stand out as the leaders, as shown in the graph below. The United States spent 801 billion dollars on their defence budget in 2021, which added up to around 38% of the world’s total. China is the world’s second-largest defence spender with approximately 209 billion dollars, an increase of 6.8% compared to 2020. China announced a projected increase of 7.1% in their defence budget for 2022. 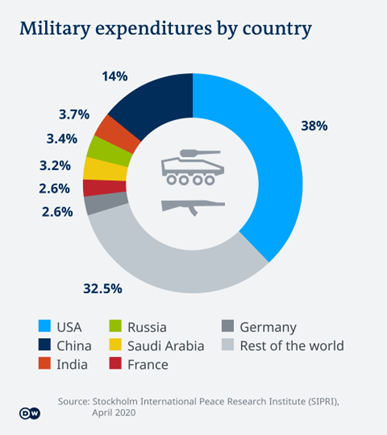 The five largest arms manufacturers in the world are American companies, as indicated by the chart below which shows revenue from arms sales for each company in the sector. Lockheed Martin is the world’s largest arms dealer. It also manufactures the world’s most expensive weapon, the F-35 Lightning II fighter jet which sells for around 80 million dollars for the most basic model. Nearly 800 units have been sold to the United States and its allies since the jet’s introduction. 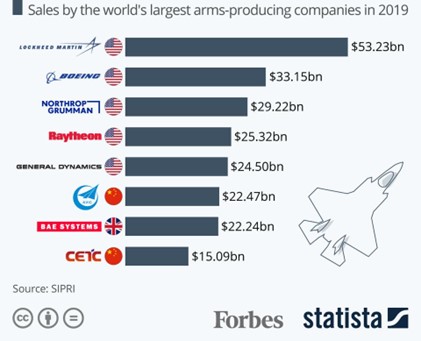 Defence company stocks soared on the news of the Russian invasion of Ukraine. As shown in the graph below, the greatest beneficiaries are German arms manufacturers Rheinmetall and Hensoldt, both of which count the German government as a major customer. BAE Systems of Britain, Thales of France, and Leonardo of Italy also saw their stock prices benefit in anticipation of increased spending by the European militaries. 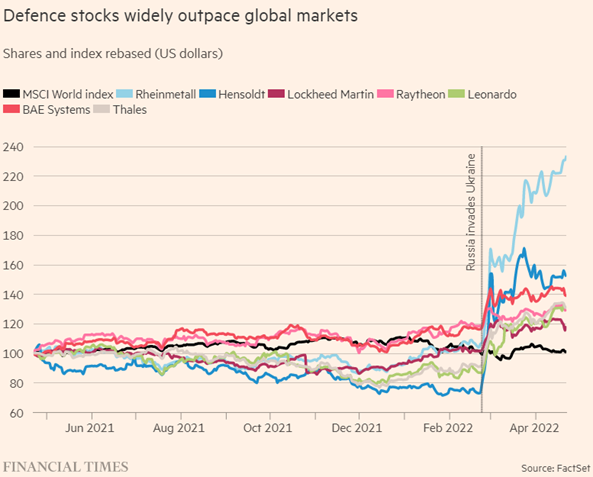 The Russian invasion of Ukraine will likely lead to a sustained, long-term increase in the defence budgets of global governments. Arms manufacturers are well placed to benefit from this increase in military spending. New competitors are unlikely to emerge quickly given the intellectual property requirements and capital intensity of the industry. Investors in the sector could ride this wave successfully if thoughtful selection of equities is done at reasonable valuation levels.