Semiconductors And The Auto Chip Shortage

Semiconductors And The Auto Chip Shortage

Semiconductors make the world go around. Without it, you would not be able to read this article, drive to work tomorrow morning, or even heat your food in your microwave oven. Also known as integrated circuits, silicon chips, microchips, or simply chips, they are the brains behind every electronic component we use in our daily lives. Some chips like the central processing unit in your phone are highly complex and require sophisticated design and manufacturing capabilities to produce. Others, like the ones managing the on-and-off rhythms of our traffic lights, are fairly unsophisticated and can be produced at a relatively low cost.

If you have ever seen a movie like The Matrix, you will know that the language of computers is made up of zeros and ones. A single computer chip consists of billions of microscopic components called transistors. These transistors alternate between being in an “on” state or an “off” state, which a computer recognizes as either a “one” or a “zero”. These transistors allow chips to be programmed with a set of instructions which leads to all the wonderful things our electronics do for us. 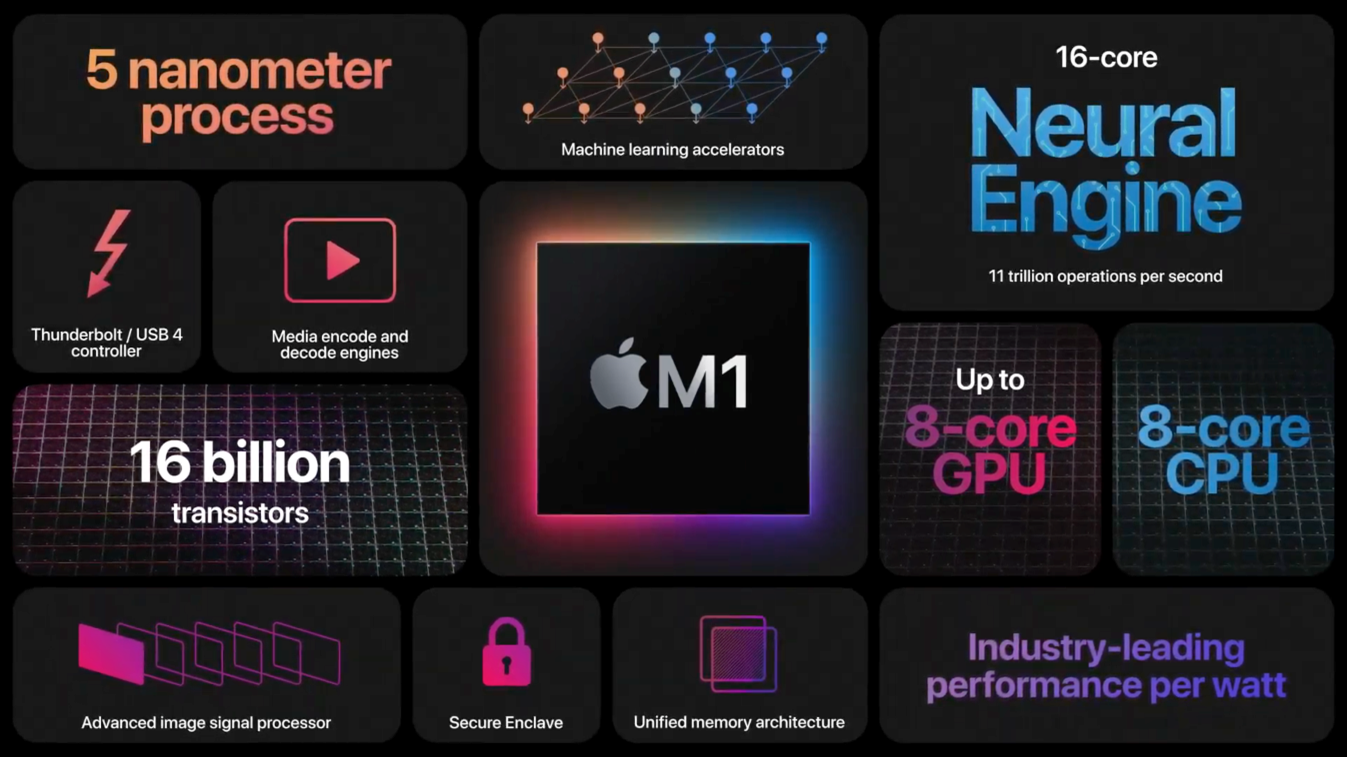 They proudly display the fact that their chip contains 16 billion transistors, and prominently mention that it was produced using a “5-nanometer process”. This is known as the process node and refers to the size of the transistors. The five nanometers node is the most advanced node humanity can currently produce, and there are only two companies in the world that can produce chips at this node (TSMC and Samsung). For the sake of reference, a five-nanometer transistor is smaller than bacteria and most viruses, and only slightly larger than a strand of DNA: 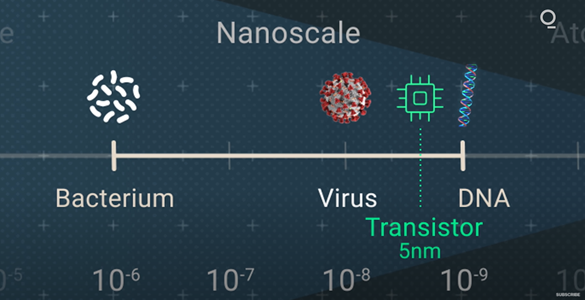 An overview of the semiconductor industry

Today, most companies that design integrated circuits do not manufacture them. This was not always the case, but the industry has, over the last few decades, developed into what is commonly referred to as the “fabless-foundry” model. “Fabless” refers to the firms specialising in chip design without having fabrication capabilities, while “foundry” is a term for a semiconductor manufacturing facility. A few companies, notably Samsung and Intel, are capable of both designing and manufacturing semiconductors. These are known as integrated device manufacturers. Apple, AMD, Qualcomm, and Nvidia are some of the world’s leading fabless companies. The foundry market is dominated by Taiwan Semiconductor Manufacturing Company (TSMC). In fact, TSMC had captured more than half of the market by the third quarter of 2020, according to Bloomberg:

One of the reasons for this dominance is the cost, time, and expertise needed to manufacture semiconductors, especially at the more advanced nodes: 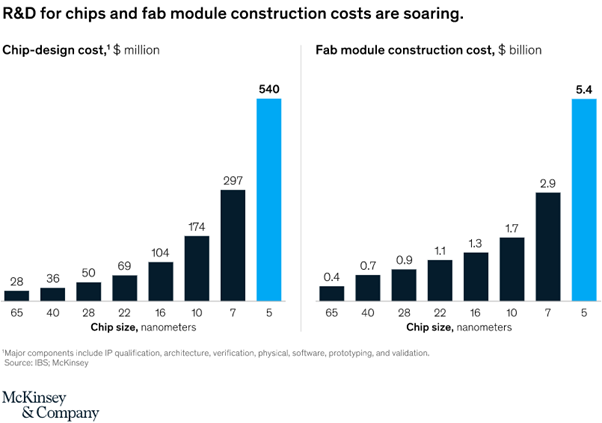 When the pandemic hit the global economy in early 2020, the world came to a near standstill and a chip shortage was one of the consequences. Despite making out a relatively small part of the chip end market, the auto sector was hit particularly hard and continues to suffer from chip shortages nearly two years after the start of the pandemic. Some of the reasons for the shortage in auto chips include the following:

• Automakers cancelled orders for electronic components during the early months of the pandemic as vehicle sales plummeted.

• Foundries responded by shifting their production lines to meet surging demand from consumer electronics as countries went into lockdowns and work-from-home became the norm.

• Vehicle manufacturers ordered more chips than what they needed in anticipation of an imminent shortage, which exacerbated the shortage in a self-fulfilling prophecy.

General Motors Chief Executive Mary Barra estimated that the chip shortage could cost her company $2 billion in lost earnings. Ford, Stellantis (formerly Fiat Chrysler and PSA), and General Motors have borne the brunt of the auto chip shortage so far with over 800 000 vehicles in lost production for these three firms. In terms of when the chip shortage is expected to end, opinions vary widely. Wang Mei-Hua, Taiwan’s Minister of Economy, has voiced her expectation that the chip shortage could end as early as the fourth quarter of 2021. However, Daimler (parent company of Mercedes) Chairman Ola Källenius has said that they expect the shortage to last into 2023. Most experts place their predictions somewhere between these two dates. Only time will tell which prediction proves most accurate.

Most of the world’s chips are produced in Taiwan. To say that Taiwan’s status is a politically sensitive topic would be a massive understatement. While most countries do not officially recognise Taiwan as an independent country, Western nations have expressed unofficial support for a free and democratic Taiwan. China, on the other hand, considers Taiwan to be a rogue province of China. In fact, Chinese President Xi Jinping has explicitly stated reunification with Taiwan as one of China’s strategic priorities.

The trade war between the United States and China has revealed the level of technological co-dependence between the world’s two largest economies. The United States has banned the export of certain critical technologies to China. Therefore, a Chinese takeover of Taiwan could lead to Taiwanese foundries being cut off from American and European technologies which are vital to the production of leading-edge semiconductors. The world is thus locked in a delicate balance with regard to semiconductor technology because everyone, including China, needs Taiwan and Western technology to manufacture leading-edge semiconductors. For its part, Western countries depend on Chinese infrastructure and labour to produce a large share of the world’s lagging-edge chips and consumer products.

The semiconductor crisis spurred governments around the world to become more self-sufficient in securing chip supply for their own industries. The response differs by country, but chip supply has become a matter of national security and a strategic priority for most nations. The Biden administration has sought to lure the likes of Samsung, TSMC, and home-grown Intel to invest in manufacturing capacity in the United States. The planned capital expenditure of these three firms in the United States is expected to exceed $45 billion dollars over the next three years. China has emphasised the acquisition of intellectual property and talent-related to leading-edge chip manufacturing in the next few years. Reports have emerged of Taiwanese engineers being poached by Chinese competitors in an effort to develop their own leading-edge capabilities.

As technology improves and the world becomes increasingly digital, we will become even more dependent on semiconductors to make our world go around. Preventing future shortages will require global coordination and the prioritisation of a secure supply chain by every country and company involved.